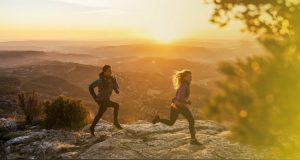 Many elite runners get acupuncture. Here’s an article in ‘Runner’s World’ in which the author describes first getting acupuncture after competing in a marathon in Japan, where it was made available to every participant in the race. He says that he used acupuncture to recover from an injury and as regular part of his training regimen. The article says that acupuncture is as widely used as massage by Asian athletes, and while some elite American runners use it to for existing ailments, it “may prove most beneficial as preventative medicine”.

I posted before about acupuncture for sports performance and recovery, and there are links to some research that show that it’s a good idea there. Magnolia buds are out in Melbourne. We use them for the nasal congestion of colds,sinusitis, and hayfever. The hairs can be a little irritating though so the buds are put in cloth bags when we brew tea from them.

The drawing is from “Famous Flowers of China” There’s an albizzia tree in my neighbourhood. We use the flowers and bark to loosen up mental and emotional blockage, and the physical conditions that can occur with them. The flowers work more on the emotions and lift mood, the bark acts more on the physical conditions that come from getting hung up about things.
The flowers are gorgeous on the tree, but they go an earthy brown colour when they dry.
Hung up. Does anyone say that these days? Sometimes ‘old-fashioned remedies’ make more sense, like using a topical treatment for localised infection.
Recently I went to a GP because I had a blind cyst in my ear lobe. Naively I expected that he would lance it, but he said they didn’t do that kind of thing anymore and gave me a prescription for an antibiotic. Don’t get me wrong, antibiotics are an indispensable weapon in the fight against potentially fatal disease, but most people are now aware of both the personal and population wide consequences of unnecessary antibiotic use. And it seems like the nuclear option to use a systemic anti-bacterial to treat a small local area of infection.
I applied a poultice of ground herbs called San Huang Xi Ji and after three days the cyst was gone.
The next time I went to a GP it was because I thought I had an ingrown toenail, and expected to get a referral to a podiatrist. But because the tissue next to the toenail was inflamed an antibiotic was again prescribed. San Huang Xi Ji was not the ideal poultice to use, but I had some ground up so that’s what I went with. Four days of application overnight relieved the inflammation.
The picture isn’t of my ear, and nobody wants to see my toenail.

As if to order, The Guardian is running an article on anti-biotic resistance this weekend, it seems to be a major concern of England’s chief medical officer. A journalist recently asked me for some explanations of people’s expectations of Chinese Medicine. She had been commissioned to write an article for the LUX* Resort group, and she probably hope for some pithy quotes that she could tie together in a brief wrapup. If only explaining Chinese Medicine were that easy.
The journalist asked me because I’m going there, I’m on their page.
END_OF_DOCUMENT_TOKEN_TO_BE_REPLACED

The Moxa Punk will often show people how they can keep themselves well. Here’s a video showing how to do Japanese rice grain moxibustion. Thanks to Michael Warren. Join me in the cosy, ecologically friendly warmth of the Van Raay Centre at CERES to learn how to cup and scrape. We Chinese Medicine practitioners use these methods to treat a range of conditions, but historically they are folk medicine practices used by regular folk. So this workshop is intended to teach people who are not health professionals how to use these methods to keep themselves, their friends, and family well.

Come dressed so that you can expose your shoulders and upper back.

Just 16 places for this one, get in quick. The fruit looks enough like Christmas baubles to make this timely. And the liquid amber fruit near my house is fruiting. We use liquid amber fruit or lu lu tong 路路通 to relieve pain and regulate menstruation. It is particularly good for breast pain and can help free up the flow of breast milk. It is used with star jasmine vine in Nanjing to relieve the pain of herpes zoster. And it’ll look good hanging from the Christmas tree, glittered up a little perhaps. Michael Phelps shows off his cupping marks. We Chinese medicine practitioners use cups to treat muscle tightness and pain, and pathogenic illness. It can be very effective alone, and can work even better when combined with acupuncture.

From our point of view the cups draw bad stuff out from deeper layers to the surface, whether it’s blood that has thickened because its flow has been restricted in a tight muscle, or external pathogenic factors that are associated with colds and flus. This explanatory model is common to traditional cupping practices throughout Asia, Europe, and Africa. A possible bio-medical explanation of how cupping helps with muscle tightness and pain is that it encourages phagocytosis to remove partially clotted blood. In his article “A Cupping Mark is not a Bruise”, cupping guru Bruce Bentley reports that a tissue sample taken from an athlete that had been cupped at the Australian Institute of Sport, was analysed as containing “old blood” (http://www.healthtraditions.com.au/uploads/212-cupping-proof.pdf).

I love doing cupping treatments. Not only do they work really well but they turn people into walking advertisements for Chinese Medicine. Not many of my patients expose their marks to as many people as Mr Phelps has though, nice one Michael. Natural food is medicine. In herbal medicine food herbs are the ones that can be used for general well-being. Mountain yam is one.

Chinese medicine isn’t big on unnecessary supplementation. It doesn’t create superfoods that are held out to be universal panaceas, and then encourage indiscriminate consumption of them. Instead it is well known that people who naively take a lot of strong tonics such as ginseng, reishi mushroom, or horny goat weed often harm themselves and need professional treatment. However there are medicinals that are classed as food herbs because their effects are gentle, and these are traditionally consumed as part of a balanced diet. They are used moderately though, and just as some foods are not the best for some people, they are sometimes inappropriate additions to some peoples’ diets.

My favourite is mountain yam or shan yao. When I was living in Japan I used to cook fresh mountain yam with chicken or pork. It’s delicious so I was eating it before I knew it was a herbal medicinal. The school Judo coach advocated eating it for strength and stamina, and as it is a food rather than a medicinal supplement there is nothing wrong with his advice.

Shan yao improves digestion and respiration, and supplements the deep reserves of endurance or resilience. It strengthens the back and knees, and improves reproductive health. As it moistens as well as strengthens it is more balanced than some tonic medicinals that are warm and drying, and is thermally neutral so won’t upset those who tend to get a bit too hot or cold. It is particularly appropriate for those whose digestion or respiration is a bit weak and tend to have loose stools or chronic breathing difficulties. It also limits pathological fluid emissions such as excessive sweating or urination. So while it is a healthy addition to most people’s diets, it is not appropriate for those who have something that they need to sweat out so people with colds, acute respiratory conditions, or excessive urination because of heat or infection shouldn’t eat too much of it.

The dried yam can be rehydrated and added to soups or stews. Sometimes I just grind it up and cook it with rice. Next weekend I’ll head out to the Footscray markets to see if I can find some fresh shan yao.