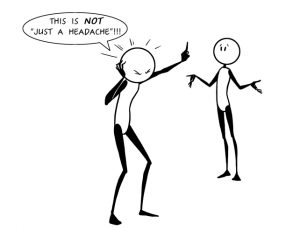 Acupuncture has been shown to prevent migraines. A recent Cochrane review of the effectiveness of acupuncture treatment at preventing migraines found that the evidence suggests that a course of treatments can be a valuable option for people with migraines, and that it may be at least as effective as prophylactic drugs at preventing migraines.
Cochrane reviewers are very particular about what they will count as evidence, they would walk into walls if there wasn’t a large number of high standard clinical trials to tell them that they were there. So when they say that the evidence suggests something works, it means that it’s as obvious as being slapped in the face with a wet fish that it does.