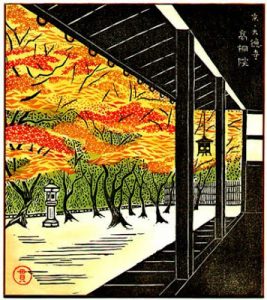 The three months of autumn,
they denote taking in and balance,
The qi of heaven becomes tense.
The qi of the earth becomes bright.

Go to rest early and rise early,
get up together with the chicken.
Let the mind be peaceful and tranquil, so as
to temper the punishment carried out in autumn.

Collect the spirit qi and
cause the autumn qi to be balanced.
Do not direct your mind to the outside and cause the lung qi to be clear.

This is correspondence with the qi of autumn and
it is the Way to nourish gathering.
opposing it harms the lung.
In winter this causes outflow of [undigested] food and
there is little to support storage.

Winter is cold in much of China, bitterly so in parts. While summer is the season of growth, winter is one of repose, and autumn is the time to prepare for winter as nature’s energy contracts. Chinese autumns are dry after hot, wet summers, and it is the organ-meridian system linked to the lungs that is most susceptible to dryness. There may also be strong winds and violent storms – this is one meaning of the ‘punishment’ mentioned above.i To counter the dryness moistening foods such as pear and sesame are eaten. Lung qi is also a part of our defence against wind, cold, and storms, so one translator of the Neijing advises avoiding smoking and grief, both of which damage the lung qi. Autumn is a good time to strengthen the body against ailments such as asthma and arthritis that some people find get worse in winter

And while the qi of autumn is dry, it is important to avoid damp as this can lodge in the body and cause coughing, shoulder and back pain, and even weakness in winter.ii So change out of damp sweaty clothes from exercise as soon as you can. Avoid wind chill as well, as getting struck by this can also affect health in winter. So even though the days are still mild, stay wrapped up and keep extra layers handy. 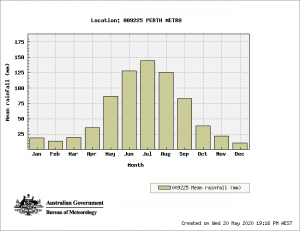 Winter is comparatively mild in most of Australia, and autumn is not always dry. Perth autumns are historically wetter than summer with the rains starting in May and getting heaviest in June and July. Rain tends to be intermittent but heavy as cold fronts cross the coast. But Perth autumns are getting dryer:iii March and April are hot and dry with temperature records being broken this year, and there were bushfires around Perth this week and most gardeners are still watering. So it could be that dryness should be associated with our autumns, as there is now an extended dry period from spring to autumn, and things keep getting dryer.

This long, hot, dry period withers us. Autumn is a good time to clear any residual heat and to moisten dryness. Clearing the heat would be best done in early Autumn, so now it is the time to eat nourishing and moistening foods:

Wong’s ‘Food For the Seasons’iv has great advice and recipes, it even recommends lamb’s fry and bacon as a seasonally appropriate dish as a little fat nourishes yin and moistens dryness. Here’s the recipe:

Fry bacon until crisp, remove and keep warm. Skin and trim liver pieces, coat with flour, season, and briefly fry both sides until browned. It shouldn’t be overcooked but be pink in the middle. Warm stock in the pan, pour over bacon and liver. This could be served with a leafy green vegetable such as bok choy. Spinach, and silverbeet are in season too.

Any stock or broth could be used. In fact just quietly, lamb expresses the qi of spring, so wouldn’t really be appropriate.

i The other is that executions were carried out in autumn

ii Dampness describes pathological fluid that tends to congeal, rather than to moisten dryness. Just as there are inappropriate ways to warm up a hypothermic person, there are plenty of ways that wetness does not moisten pathological dryness – bathing, getting caught in the rain, wearing damp clothes, living or sleeping in a damp environment.

The ukiyo-e is Daitokuji Takagiri-in by Kantatsu Yoshizawa and is from the “Thoughts from a Takayama Rooftop” blog.